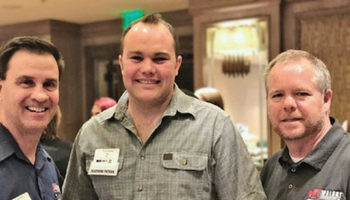 Then-president Tom Simplot gave an update on AMA programs and an overview of the benefits of participating in AMA’s PAC, AMAPAC. Together, Tom and Amy also talked about the National Apartment Association (NAA) and its political action committee, NAAPAC. The evening included a round-table discussion of how this networking group could grow in the future and the kinds of programming that members would appreciate. There was a strong consensus from this Flagstaff Coalition that networking, motivation programming and education would be valuable to these members. More than 10 members volunteered to help launch the Flagstaff Coalition Committee in the area with the support of the AMA.

Plans are underway for another networking event later this summer so please check out the AMA website for details. In October, there will be another mixer scheduled for members and prospects. If you are interested in participating in steering the future of the AMA in Northern Arizona, please contact Michelle Rill at the AMA.