Lights On: iLuminate Shines for the Phoenix AMC Meeting 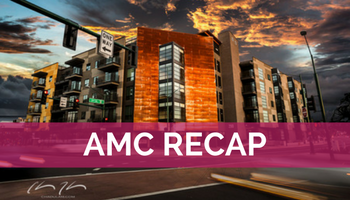 A new urban lifestyle has debuted in the Roosevelt District at Baron Properties’ newest community, iLuminate.

Ground broke on the community in early 2016 and opened fourth quarter of the same year. Before the redevelopment, this property was home to the iconic 307 Lounge, Phoenix’s first drag bar, and the company has installed a plaque to honor the historic site.

iLuminate seems to be an urban oasis with a luxurious, yet local feel to it. AMC guests were welcomed for registration and networking at their second story resort-style pool, which is on the second floor. Cabana-style lounge seating gives residents a view of tranquil fountains shooting across either side of the pool. Our guests sipped traditional and mango margaritas to enjoy prior to the visit to the rooftop “sky lounge” where the AMC meeting was held.

The views from the Sky Lounge make the visit worth a special trip. From downtown, to the vibrant street scene, all the way to Camelback Mountain, iLuminate offers guests and residents a front-row seat to the best of Phoenix.

This new 111-unit community integrates technology at every turn from the underground parking to the networking and business lounge and high-speed connections into each unit. A 21st century community, everything can be found within the building where residents can work in their homes or in the common areas using the free wi-fi, and take advantage of the fitness center, yoga studio, and coffee bar. Exploration of the local neighborhood seems to be encouraged. iLuminate partnered with ArtLink to encourage residents to invest in local art. In addition, their own club areas feature artwork by several local artists and a commissioned mural in the Sky Lounge.

The building earned Silver LEED certification and lives like a modern midrise. Luxury finishes throughout, one of the most dramatic features is the floor to ceiling windows with views of Roosevelt and downtown Phoenix that bring the outside in.

iLuminate is off to a strong start on their leasing with more than 70 percent of the units under contract in just five months. Baron Properties, which is headquartered in Denver, also operates a corporate office in Scottsdale and plans for continuous growth in the Phoenix market. Today, their portfolio includes more than 21 properties and 4,000 units across Colorado, Arizona and Texas.

Scott Allen, the General Manager of iLuminate, and his team toured over 75+ members around his impressive community. Congratulations to Riki Carmona from Burns Pest Elimination who won the lunch raffle with Shelly Griggs, Baron’s Regional Manager.