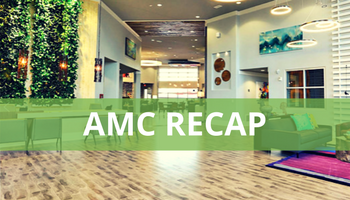 Mark-Taylor hosts a ‘Hyve’ of activity and fun for AMC

Walking into Tempe’s Hyve, one immediately gets the impression that this is a community that’s welcoming and active. The modern design of the clubhouse, complete with a coffee bar and relaxation area, feels like the coolest living room in town.

Residents can experience a luxury resort lifestyle complete with towel service at the pool, a yoga deck, touch screen fitness equipment and more. For those who want to dig into their community, there’s even a resident maintained vegetable and herb garden.

AMC members had the opportunity to tour this extraordinary property with manager Ciera Moraga. Mark-Taylor took over management of the Hyve in late 2016, following their opening in 2015. Following a rebranding and the integration of their signature resident relations, the community boasts 96-percent occupancy in the 296-unit development. Moraga shared how Mark-Taylor’s resident relations programs and their approach to customer service set them apart as a management company. The Hyve’s amenity rich community near downtown Tempe is target to young tech working, building on the city’s success in attracting quality jobs to the area.

The Mark-Taylor team welcomed 75 AMC attendees for the meeting and the group was especially appreciative of their willingness to jump in a host on short notice. During the catered reception, Moraga introduced her team including Mike Pantoja, the service manager for the property and TJ Forster, an Asset Manager with Mark-Taylor. The group also had a surprise visit from the company’s senior leadership team including Linda Coburn, Asset Manager, and company President John Carlson.

Vision for the future

Carlson spoke with AMC members about the vision for Mark-Taylor’s future. Today, the Arizona-based company holds a portfolio of 14,000 units here and in Nevada. Mark-Taylor is Arizona’s largest multifamily development company and currently manages more than $2.5 billion in multifamily real estate. He also spoke about his work with the National Apartment Association and travelling around the country with that work. He offered high praise for the relationships built and the professionalism of the AMA.

Their newest development, San Portales located in Silverstone in Scottsdale will be the company’s first self-developed property that will include elevators. Most of the communities developed by the company offer garden style living.

In addition to the AMC raffle, the Hyve team also created a special trivia game for their guests and two associate members won gift cards. The winner of the lunch raffle with TJ Forster and Ciera Moraga was Joseph Reynolds at Sierra Fire and Communications.